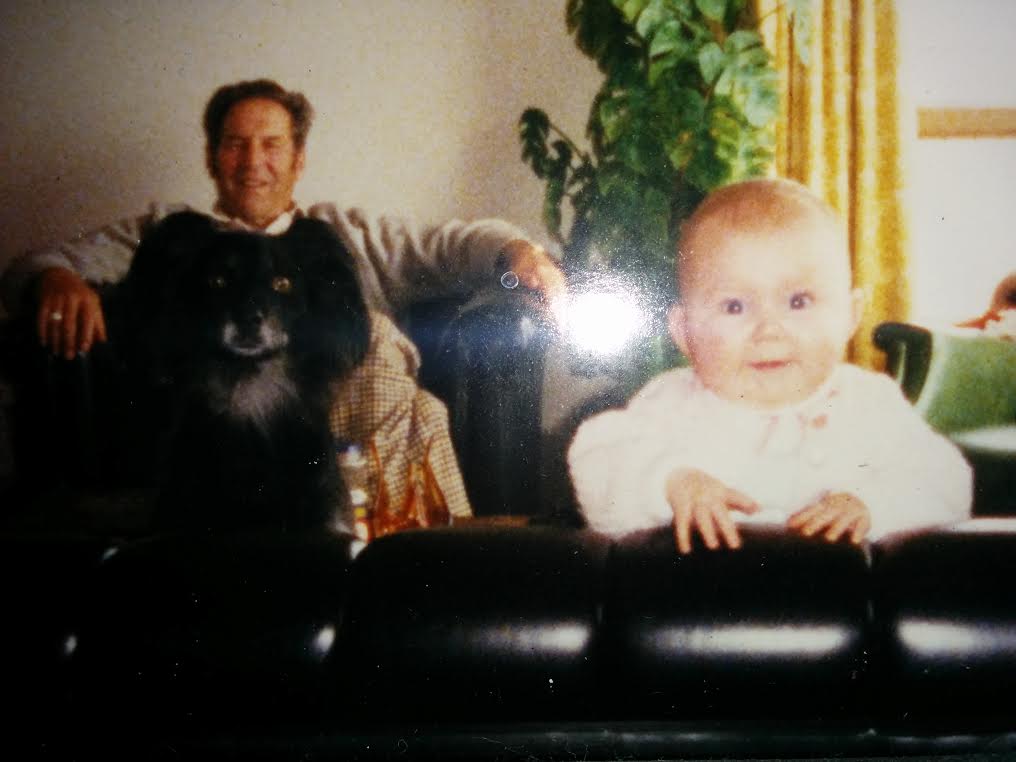 There are two fine little ladies in this picture. The roly poly bald one is me, at about fifteen months. And the cutie wearing the exact same facial expression is Toby, the rescue dog my parents brought home as a sweet puppy months before I was even conceived.

Toby was a beautiful, sweet-tempered, playful little dog. No one could even guess at her breed. There was probably some collie in there. She was friendly and she listened well, and even my friends who were afraid of dogs loved little Toby. She lived to a ripe old age of seventeen. She was a great dog and she was unique, which is part of what’s fun about rescuing mutts. Nobody out there had a dog like Toby. I’ve looked and looked and never found another pup who had her curly ringlet ears, small stature, vulpine snout, and long hair.

Toby was such a fixture of my life. We had her since before I was born, and she died when I was sixteen. She was there through all the formative years of my life. So when I first heard all the stereotypes about rescue pets — that they’re poorly behaved, that they’re rangy, that you’ll never be able to train them right, that they misbehave around other animals — I was just so shocked I didn’t even know what to do with myself. Pets like Toby were supposed to be those things? There was no way!

Well, fifteen years later and I still believe that. If anything, I’ve only gotten more passionate about how great shelter pets are, because I’ve gotten a lot more of a sample base of choose from. 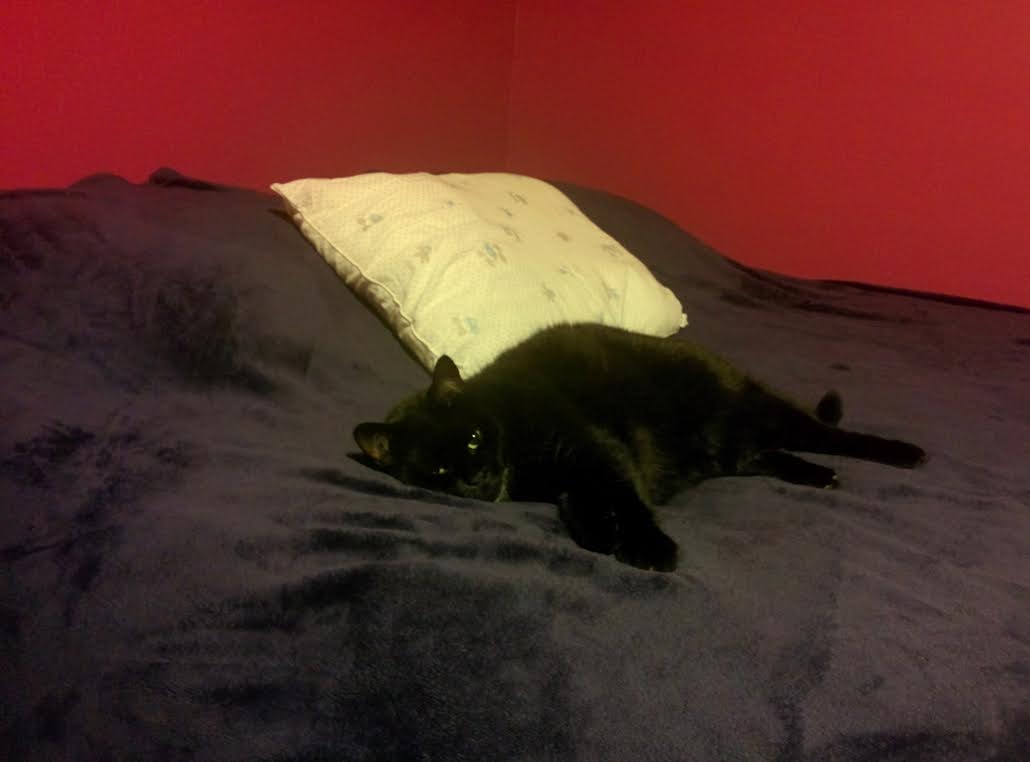 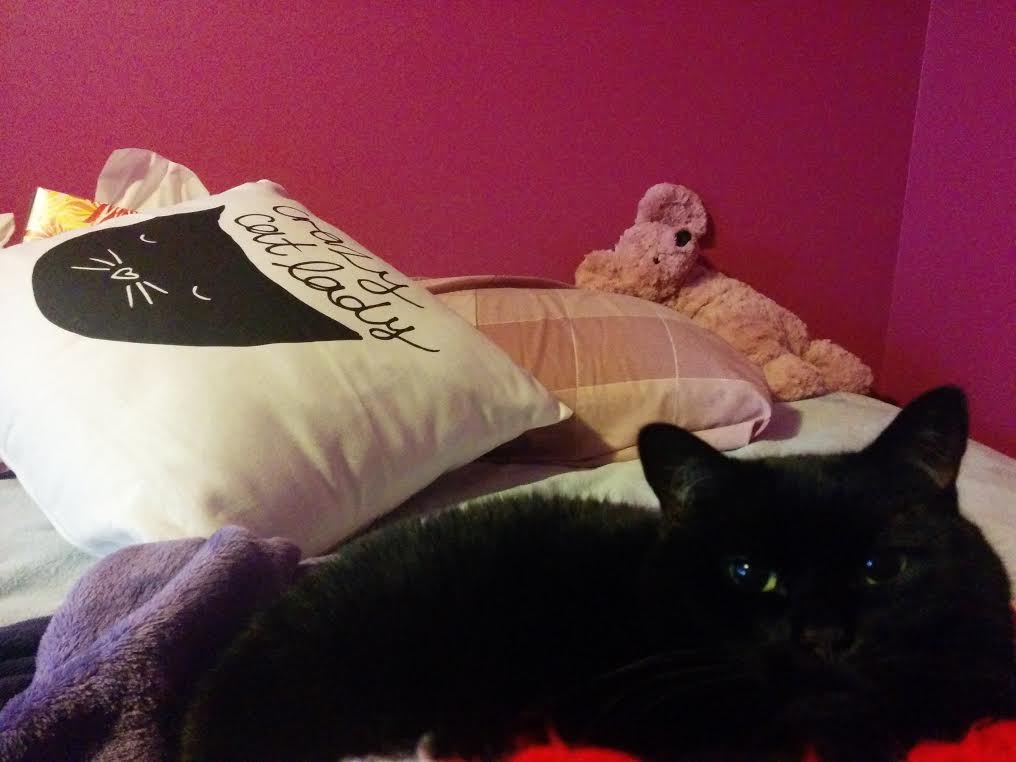 This little black princess, for example. This is Bree, and she is a diva. I adopted Bree at a shelter as a kitten. Black cats have always had a really tough time getting adopted because of superstition and general dislike of black pets, but now they’re facing even bigger struggles and going adopted even less because they don’t look good in selfies. Like all things dark coloured (including, disturbingly, people), black cats have a hard time popping in photos because cameras are calibrated to pick up contrast in a white human’s face and not much else.

Bree is a brat through and through, but even people who don’t like cats tend to fall in love with her. She’s all affection and attitude at the same time, purring loud enough to wake the dead even as she’s dodging your attempts to pet her. I always wake up with her curled at my side. 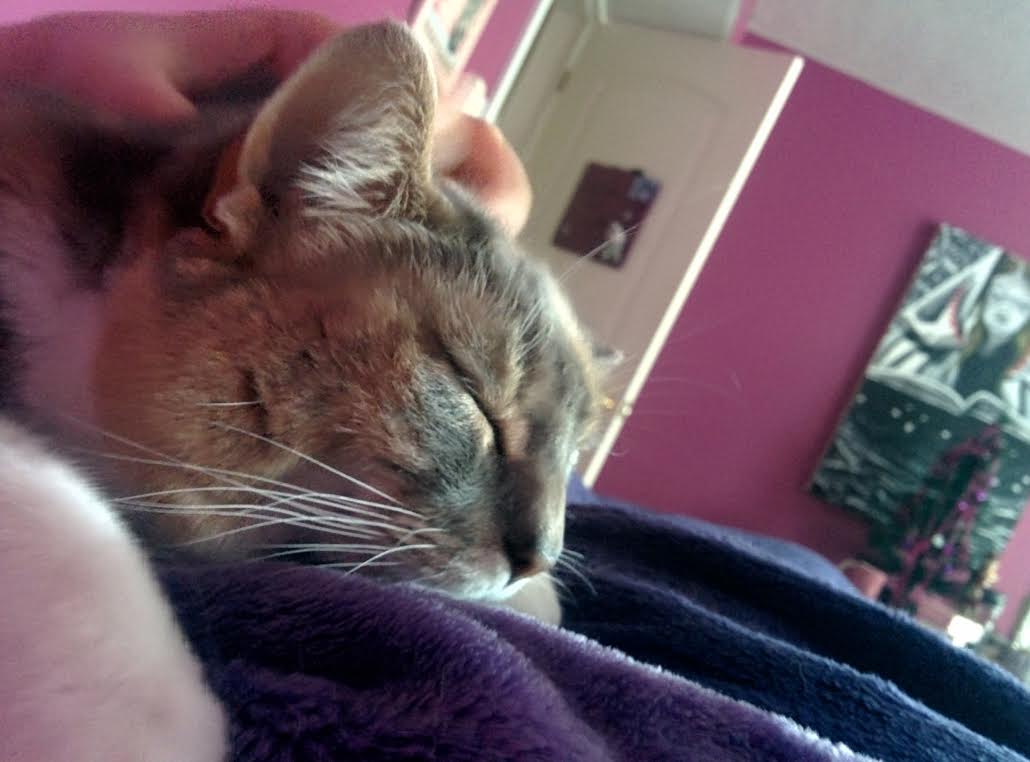 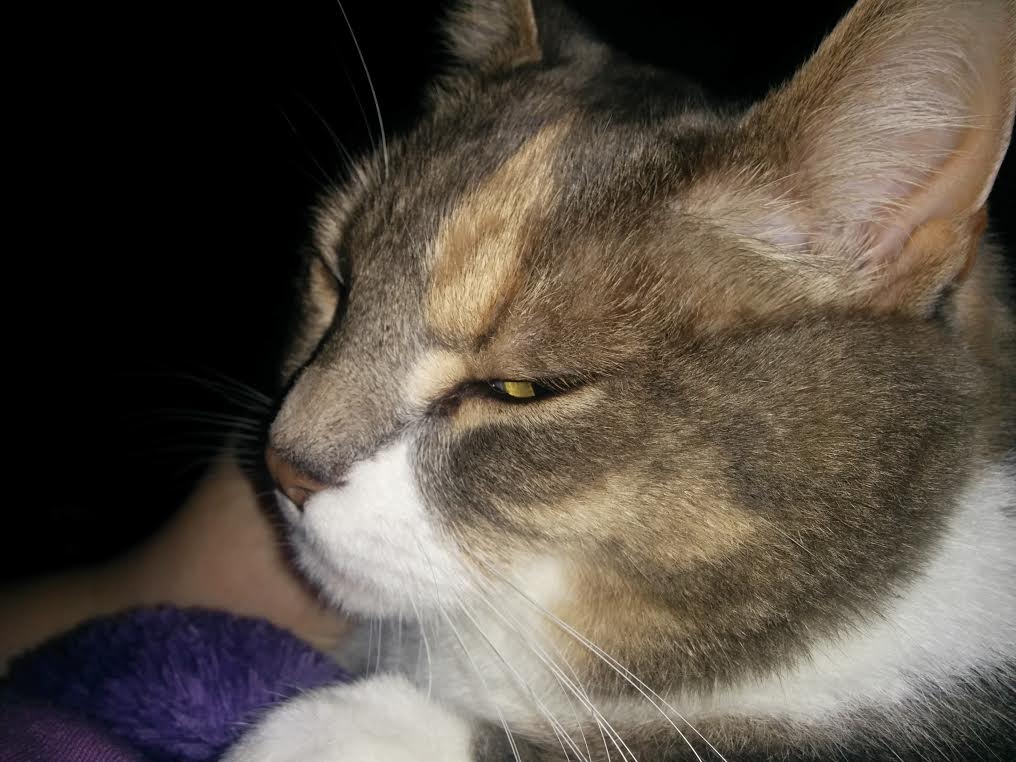 Bree’s worst enemy comes in the form of Nessa, my snugglebunny. I adopted Nessa from my local shelter when she was four. Adult pets are exponentially less likely to get adopted than kittens or puppies. There are a lot of suppositions about how adults will never really love you because they’re imprinted to their first owners and so forth. There’s just no way this is true! Nessa is my lovey girl. She will climb into any available lap, use you as a bed while you sleep, curl around your feet so you can barely walk, and you should see her go bananas when she sees a can-opener. Despite all the myths about adult cats being unlikely to bond with their new owners, it’s Nessa the adult rescue who is the cuddler, and Bree the kitten rescue who is far, far too good for any of that nonsense.

Nessa is a low key cat most of the time, but she loves having balls thrown at her and will chase them across the floors. The shelter gave me a lot of time with her to decide if she was right for me, but I knew I wanted her right away because she never stops kneading and purring. She needs her nails clipped vigilantly because she kneads so much it can hurt!

When I adopted her, Nessa was really overweight, but by sharing a diet regimen with roly poly Bree, she’s dropped a lot of pounds and has a lot of energy! 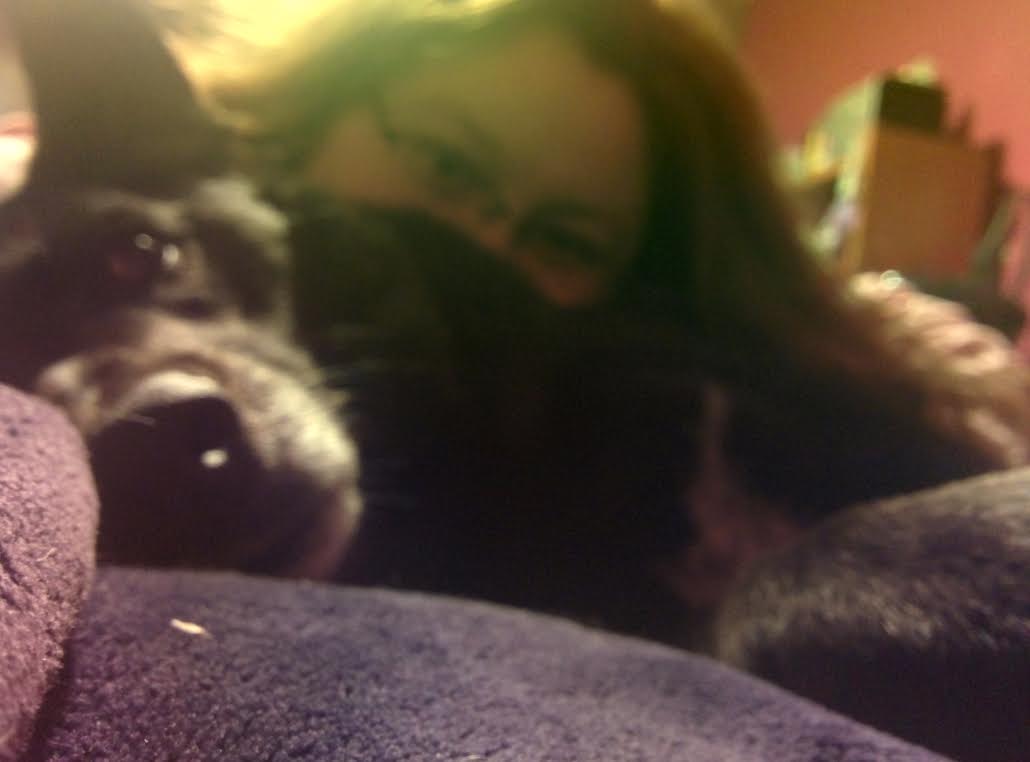 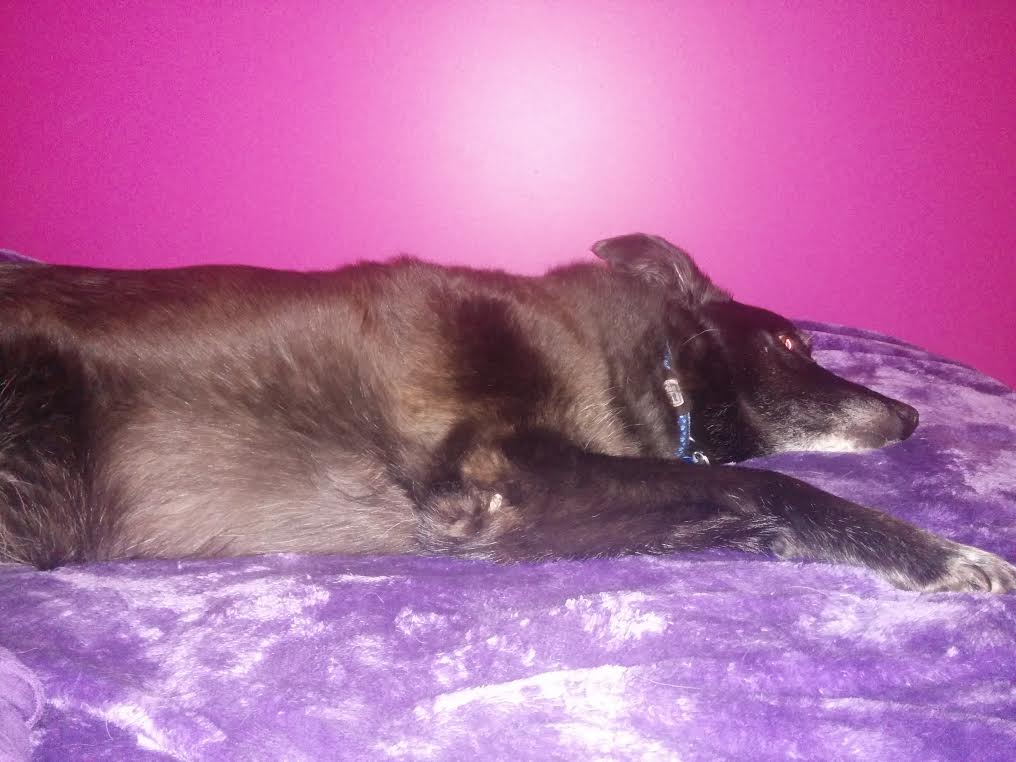 My last girl is Mia. I saved Mia for last because I’ve never even heard of a pet quite so perfect an argument for the wonder of rescue animals than Mia. Mia is a German Shepherd/Labrador Retriever/Siberian Husky mix. I adopted her from the local shelter when she was nine weeks old.

For people who like big dogs at all, Mia is the kind of dog that you spend your life waiting for. She’s obedient and loyal, affectionate and playful, energetic but never exhausting. Mia loves to play fetch or tug of war, but as soon as you tell her that play time is over, she curls up at your feet with a big sigh and falls asleep. If you tell her to get down from the bed, she will, but she loves to snuggle up against you and get spooned. She loves her walks and drives in the car, but she behaves well when you leave her alone. Her favourite thing in the world is winter! All those northern breeds has made Mia miserable in July and August, but when new snow has fallen, she’ll dive into it with her whole body and roll around until it’s flat.

Mia had actual problem solving skills! She asks for food by bringing us her empty dish in her mouth. When faced with her favourite toy and her food bowl in the same place, she’ll pick up the boy, drop it into the bowl, and then pick up the bowl, carrying the toy with her. She understands a lot of phrases and can actually seem to follow most conversations about her. It’s such a delight to watch her try and get a claw on her upside down bowl so that she can flip it up into the air at an angle and catch it in her mouth. And ask to be fed with it.

I love my shelter adoptions. Every one of my pets, I rescued from a life of foster homes, or something a lot worse. Thousands of wonderful dogs and cats like Toby, Mia, Bree and Nessa are euthanized every year because supply is greater than demand. Every adoption is one step closer to putting pet production out of business and making it so that more and more sweeties find homes.

And just to drive my points home, here are some of my friends’ rescue cats: 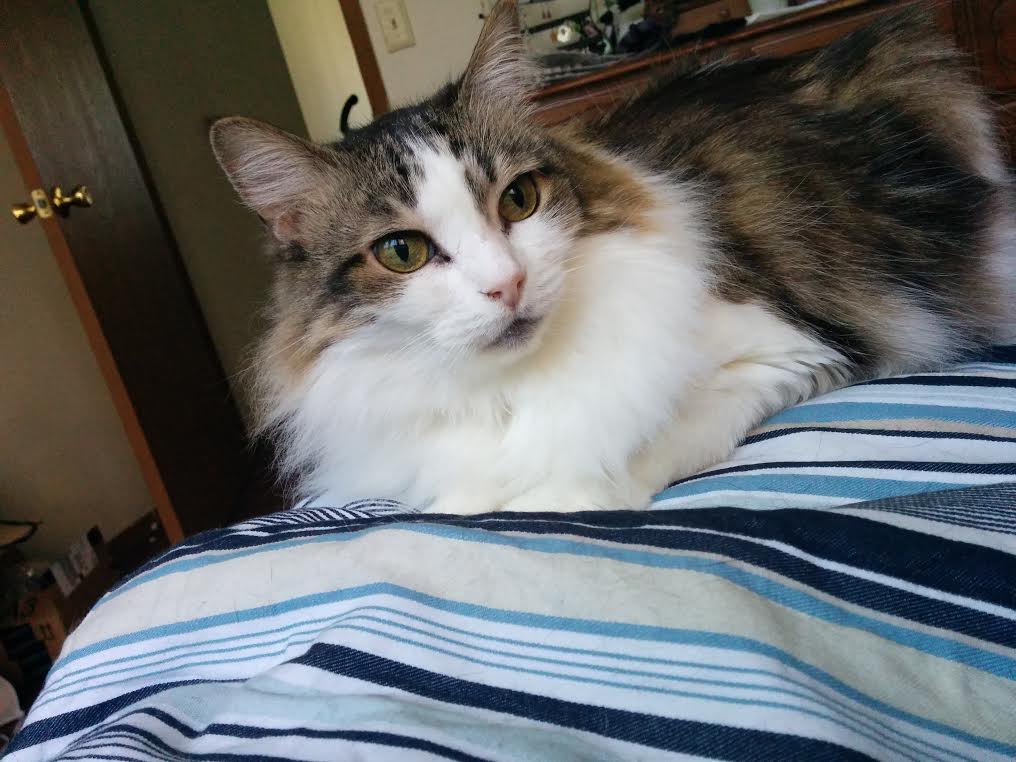 Celeste is a gloriously pretty girl who loves love. She has a purr that sounds like tissue paper crackling and she’ll lick your skin right off giving you kisses if you let her. (Don’t let her, her mum gets mad!) She looks elegant, but she’s kind of a doof. She walks around with her neck ruff in her mouth because she gets it stuck. She was adopted as a four year old adult. 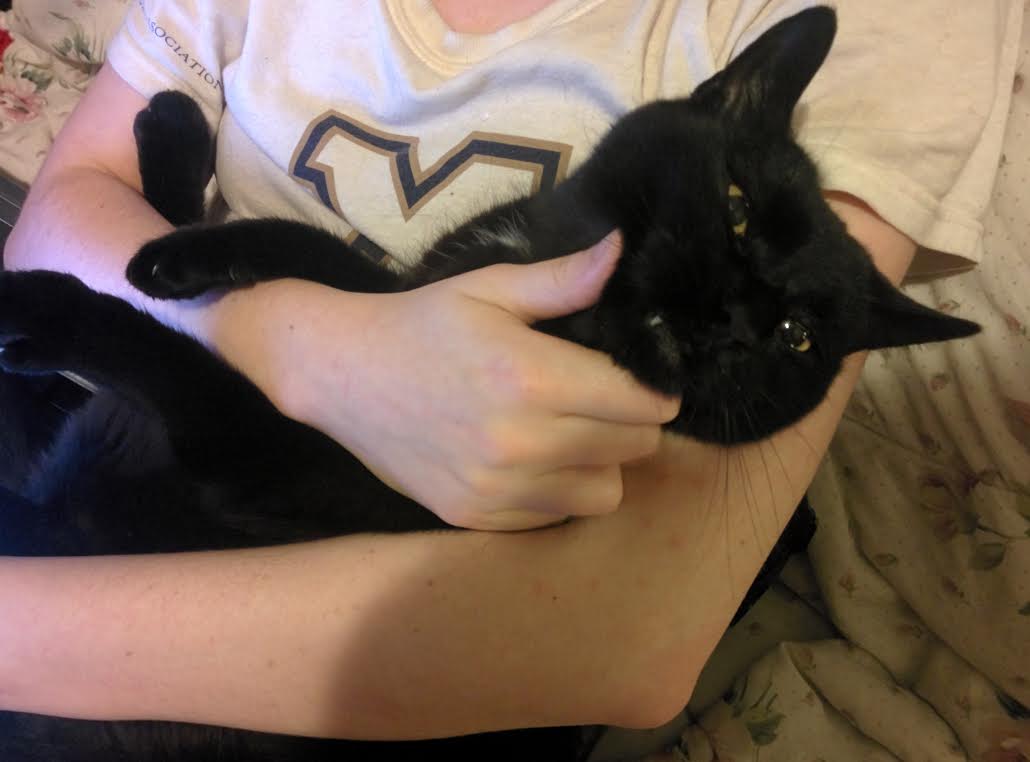 Jace is constantly crabby and also he loves you so damn much and will crawl all over you demanding belly rubs. A stranger would think he’s shy, but his mum knows better, because she can’t get things donewith him snuggled up in her arms at all times. His front teeth protrude so he look like a lil vampire. Too cute! He was adopted at four years old as an adult. 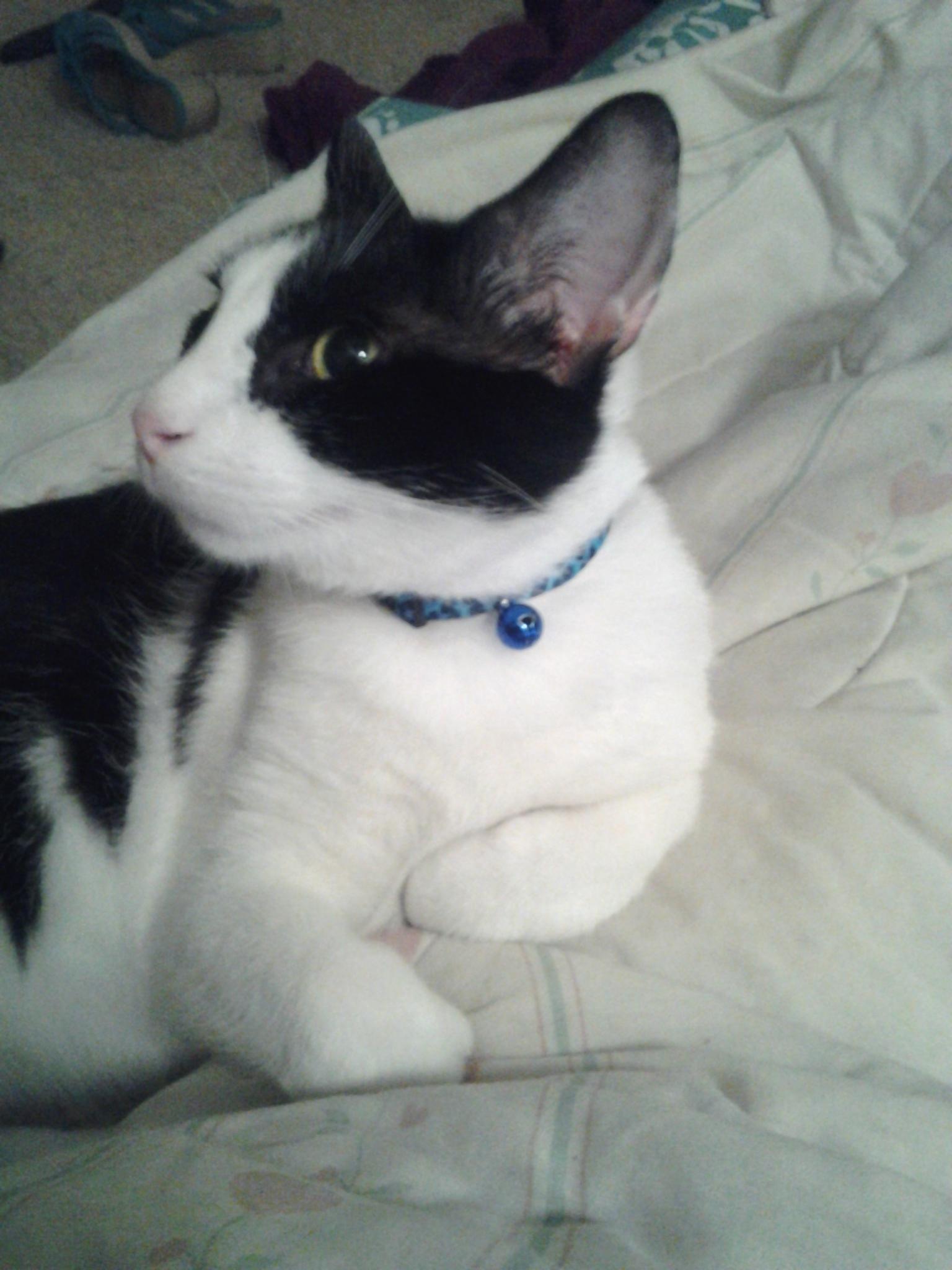 Rowdy is very well named. He is a little bugger who will play himself out and then collapse into a pile. He is super affectionate and purrs loud enough to be heard from the next room. When someone comes in the front door, Rowdy stops whatever he’s doing to bumrush that door to see who it is. Rowdy was a feral cat who got injured and was brought in by a local vet to the shelter where she worked. Rowdy was so friendly that the vet was afraid to let him go back out into the world, because he’d probably walk up to coyotes and try to become friends! Luckily he found a home. Rowdy was adopted at one year old as an adult. 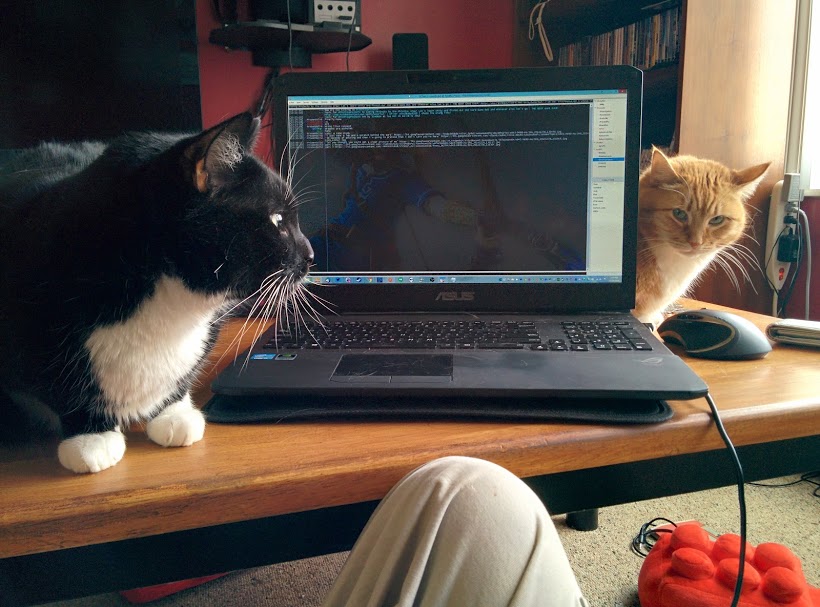 Simon and River are a brother and sister pair. Lithe and strong and huge, these two couldn’t be more different. Simon wants to be your friend while River wants you to please leave her alone — but maybe admire her pretty golden coat from a distance. But they both melt when their dad is around. Simon and River were adopted as a pair when they were six months.

As you can defintiely see, rescue pets are so much more than feral strays, poorly behaved rejects, or unattractive mutts! Every single one of these sweeties came from a shelter, and every single one is an amazing pet with a unique personality. They’re wonderful animals that need your love. I don’t think that my little blog post is going to convince anyone who isn’t already on the fence pretty heavily, but if anyone is thinking about a pet, think about adoption!

And if you’re really not interested, well, then enjoy the cat pics. Who doesn’t like cat pics?