Chris and Olivia are the only two characters who were both planned to be in the book and came out the way they were initially planned. Everyone else either joined the cast later on, or deviated wildly from their original concept.

Officer Maris Dawson is one of the former.

There’s exactly one reason that Maris broke into the book. While finishing up my outline and making sure it was going to work – this was once I already had over ten thousand words written! – I came to an unfortunate realization: The Deathsniffer’s Assistant didn’t pass the Bechdel test.

The test is a simple bit of feminist critical theory that started as a joke by cartoonist Alison Bechdel in the 1980s. It has three criteria. In order to pass, a piece of media has to have:

1. At least two female characters,
2. Who talk to each other,
3. About something other than a man.

It didn’t seem possible that I could fail the test. I strongly identify as a feminist and work hard to ensure my female characters are diverse, interesting, and have their own agendas. Considerably more of my cast is female than male! But as I went through the list of characters in my first book and compared them against the outline, I came to a pretty startling realization.

Rosemary, Evelyn and Analaea val Daren, and Vanessa Caldwell all interacted at least once with Olivia. But each time, they were discussing a man. The murder victim in the first book is male, and Olivia’s interactions with these characters were either about him or Christopher. Rachel and Rosemary’s interaction all happens offscreen and is communicated to Chris by one or the other. Somehow, while I had passed the first two qualifiers with flying colours, I’d utterly failed the third. It became obvious that I was going to need to add another female character, someone with a more personal relationship to one of my leads, if I was going to pass the test. 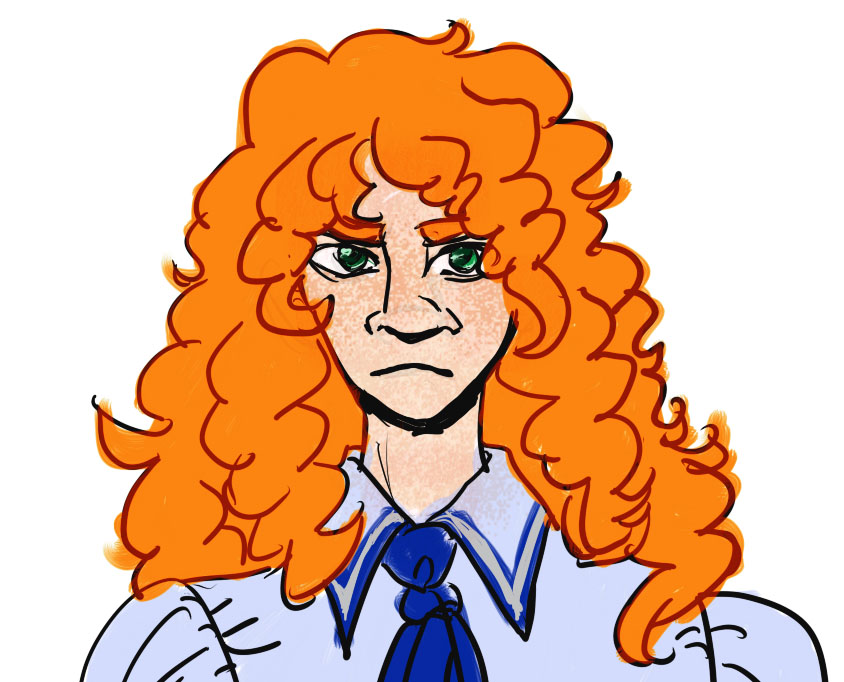 I identified a bit of world-building I’d glossed over. I’d decided early on that investigators were beholden to the police, who used them as independent contractors and outsourced their cases. The sudden permission to create another character let me explore that a bit, and I decided that Olivia needed a supervisor.

And then Maris kind of just… happened. The moment I realized that she should exist, she did exist. A stern, tough, handsome redhead, burly and indelicate and dry. Faux-Scottish with a rough brogue, contrasting Olivia’s sharp-tongued English way of speaking. Someone who would have no tolerance for Olivia’s bullshit, but who Olivia would be incredibly fond of. Someone to show the reader – and Chris – that Olivia did care about some things other than herself, that in her own way, she had formed attachments to the world she inhabited.

Everything about Maris snapped into focus in a split second, and she quickly wound herself in through all the empty spaces the book had. She became absolutely necessary to the story. She provided a little window into Olivia’s life pre-Chris, and provided the context for a major subplot in the first book, the minor mystery of Constance. She allowed me to have another likable, sympathetic character with traditionalist leanings, to make the deck seem less stacked in favour of the reformists. And, as I originally planned, she let me pass Bechdel.

Whenever I read sections where she and Olivia rib one another, ask about each other’s personal lives, or just complain about work, I smile to myself. It humanizes Olivia a bit, adds texture to her life, and makes her feel like she existed before Chris met her. All that aside, Maris has become a central part of the series as a whole and plays an increasingly major role in future books. Passing Bechdel actually did make my book stronger.

I see a sentiment online a lot. “Diversity shouldn’t be added for the sake of adding it.” And to them I say: why not? Maris is one of my most popular and favourite characters, and she wouldn’t exist if I wasn’t trying to check those boxes. If an element doesn’t work, by all means, massage or cut it. That’s just good writing. But fantastic characters and plotlines might be hiding behind that diversity barrier. You just need to be willing to look.

Maris is at her most professional in The Deathsniffer’s Assistant, but in The Timeseer’s Gambit, you’ll see her in a much more personal context and learn a bit about who she is when she isn’t Officer Dawson!