I rarely use my blog to talk about personal things that aren’t strictly related to my writing or my books, but the passing of Carrie Fisher has affected me in such a profound way that I find myself needing to put my thoughts down somewhere.

I was first introduced to Star Wars by my best friend in middle school, and I immediately fell head over heels in love with the feisty, brave, competent, and beautiful Princess Leia. Looking back now, with the hindsight of a queer woman, I was always pretty much in love with her. But more than that, I wanted to be her. I wanted to tap into that strength and fearless determination that she had and siphon it off for myself. I was thirteen, learning myself, and Princess Leia was a monument to what being a woman could be.

It wasn’t until years later that I started to really learn about the woman behind the character.

The first thing you find out about Carrie Fisher after loving her in Star Wars is about her struggles with addiction. There’s something transgressive and salacious about it, that the fresh-faced, spirited, confident princess was fueled by cocaine and LSD. “Carrie Fisher? She did some hard years,” people will say, nodding sagely. Which she did. But the story isn’t dark or deliciously scandalous. It’s about triumph.

Carrie Fisher, like me, was diagnosed with bipolar disorder. Everyone with this disorder self medicates one way or another. And Carrie fought to overcome that, to overcome all of it, and to become a self sufficient, self sustaining, and healthy woman. She fought and she won.

There’s a lot of reasons I identify with her, and some of it is that we had some of the same struggles. But a lot of it is that Carrie was a writer to her soul. Acting was never her dream. Writing was where her heart was. Princess Leia wasn’t just a character Carrie played — she was instrumental in the writing process. Check out Carrie’s handwritten notes on Leia’s dialogue for The Empire Strikes Back: 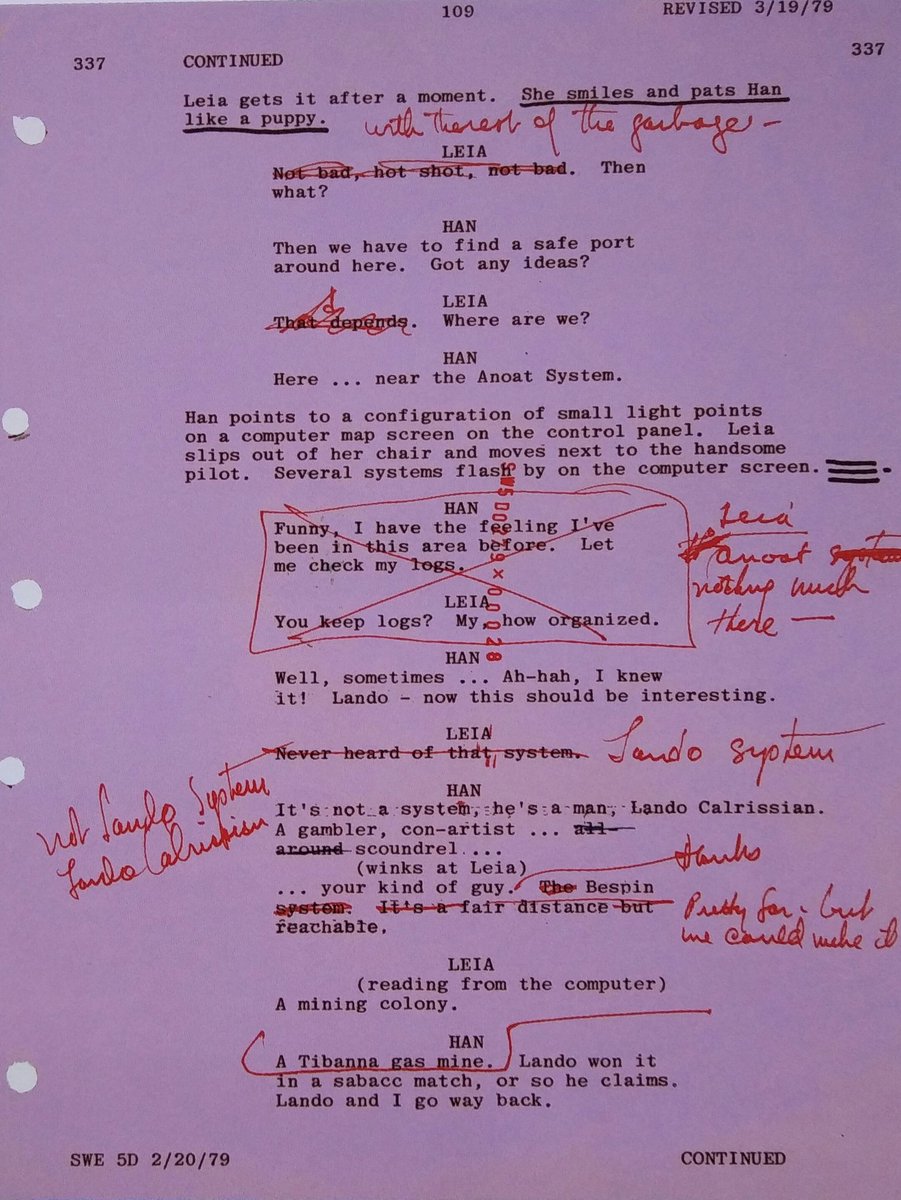 Carrie’s edits made it into the final film and flow so much better than the original lines. “With the rest of the garbage” is such an iconic Leia moment, accompanied  by that little smile she has when she says it. And did I mention that Empire was the film Carrie was high during? She did these great edits and played these scenes with such finesse while high.

Leia’s strength was fed by Carrie’s. The older she got, the more passionate she became, and she was a champion for feminism and the value of women past thirty. Her rants about that goddamn golden bikini were always so delightful. She claimed to “think with her mouth” and her off the cuff, short way of talking could be insightful, moving, or just laugh out loud funny. She loved to just talk, to share her feelings. She had no shame about anything at all, and that’s something I wish I had in me.

I’m not the sort of person to get sentimental about the passing of famous people I admire. I’m something of a bright-eyed fatalist, embracing the inevitability of death as a time to rest. But today has been hard for me in a way that nothing but the deaths of close family and friends ever is.

Part of it, I think, is that she just had so much left to give. Leia had finally come back to the big screen and Carrie was leveraging her visibility as a platform for everything from new books (The Princess Diarist just came out!) to twitter rants (her barely penetrable internet-speak was charming beyond words.) She was visible and loud and out there, and suddenly, because she picked a bad time to have a heart attack, she’s simply gone. I feel like I’ve been cheated of all the things Carrie the writer, Carrie the actor, and Carrie the personality had left to give me. I feel like the thirty years I should have had with her have been taken away from me. And it’s leaving an empty space in my heart.

But maybe part of it is that my view of the end of life as a time to sleep and be at peace doesn’t feel right for Carrie. She’s not the type to long for a chance to lay down and rest. Carrie Fisher was the very soul of life itself. Thinking of her as anything but living it what really hurts.

Here or gone, Carrie Fisher is always going to be someone I look to for insight and answers, a What Would Carrie Do? sort of figure in my mind. I hope I can continue to learn from her. I’m going to take the rest of the day to start reading The Princess Diarist and glean every bit of insight I can from the pages.

After hearing George Lucas’s half brilliant, half ludicrous explanation of why she couldn’t wear a bra, Carrie decided that it sounded kind of beautiful. She said that no matter how she died, she wanted everyone to say that she was drowned in moonlight and strangled by her own bra. So that’s what I’m going to say, when someone asks how she died. That’s what’s worthy of such an amazing, brilliant, multi-faceted, and fearless woman. And instead of saying rest in peace, I’ll say rest in riots, because I think that’s what she would have wanted.